Mainly used in deep sea trolling, outriggers are a pair of long poles fitted on both sides of a boat that holds fishing lines away from the boat. It is usually made of fiberglass and aluminum, and is tilted at an angle between 70 to 80 degrees.

When being used, outriggers are lowered to an angle nearly the same level as the water’s surface. At the edge of each outrigger is a pulley with a cord, attached to which is a quick release clip that holds the fishing line. Once a fish strikes, the line is released so that it can be landed with the use of the traditional rod and reel.

Generally, outriggers improve the chances of a fish striking because not only does it allow the angler to cover more ocean space, it also permits the use of multiple lines. Because outriggers allow the use of multiple rods and reels, anglers can troll as many fishing lines as it may allow, thus, simulating a school of bait fish. It also allows the leader out of the water, thus, preventing bubbles that may scare the fish away.

Outriggers also hold the fishing lines at a distance from both sides of the boat, spreading the lines far enough to prevent the risk of tangling. With more lines in the water, the angler can set them at different distances and depths that can create a variety of natural patterns to increase the chances of a strike.

The shallow, rocky reefs are also home to many fish species, however, trolling in these grounds are dangerous. With the use of outriggers, the fishing boat can stay in the safe deeper water while the lures are positioned to graze the shallow waters.

Marlin is a prized game fish, mostly because it offers a big challenge to the angler as it fights long and hard.

The Atlantic Blue Marlin caught by JPeter Ganz was estimated to be 1,400 lb. It was caught off the waters of the islands of Azores, a Portuguese archipelago – near the Faial Island. This fish was not hauled in but was tagged, revived, and released back to the waters. For sure, this fish is among the largest caught.

Jacky Delbrel caught a 1,189 lb Atlantic blue marlin, again in the part of the Atlantic Ocean in Azores, near the island of Facial. This catch holds the IGFA 80-pound world record for Atlantic Blue Marlin.

It was in June 26, 1974 that the first thousand-pounder marlin was caught off the Oregon Inlet by Jack Harrington. Among the largest caught to date, this is worth mentioning especially since not too many thousand pounders have been caught. This marlin weighed 1,142 lb.

Tracy Melton caught an Atlantic marlin weighing 1,083 lbs in Madeira. It was caught with an 80-pound tackle.

Of course, there are also plenty of marlins caught that are not listed here but could be heavier than these. There are also talks of fish weighing as much as 2,000 lbs which were almost caught.

Did you ever wonder what the 5 largest Marlin ever caught looked like? With all due respect to current anglers, these past anglers were doing this with equipment that they say is not usable any longer. Make you think? Imagine how impressive these beasts really were. Today, we’re looking at the 5 biggest fish ever caught. 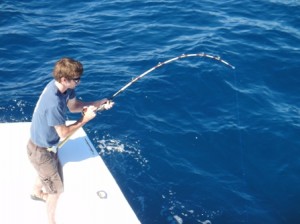 Rigging Fresh Ballyhoo is the Way to Go 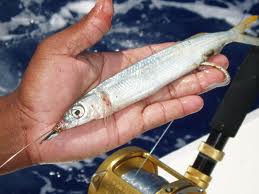 Rigging Fresh Ballyhoo is the Way to Go :

Trolling is a method of fishing that involves using baited fishing lines which will be dragged through the water. It is practiced all over the world and has been done so for hundreds, if not thousands, of years. If you want to go trolling, one of the first things you have to learn about is rigging your bait.

Bait shops carry rigged bait, including Ballyhoo. However, nothing beats the satisfaction of rigging your own fresh Ballyhoo. Here are some steps you can follow to help you rig a fresh ballyhoo.

3. Prepare you leader hook by having the monel wrap around the shank. Open the gill and insert the hook into the throatlatch. It should not be in the belly as it can loosen during trolling. The monel should be hanging down. Thread the monel through the eye cavity at least three times.

On average, it would take around 3 minutes to finish prepping and rigging the ballyhoo.