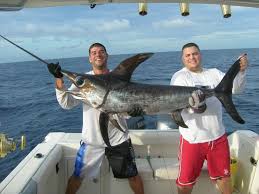 Now THIS is a sword fish!  This sword was taken off the coast of Massachusetts with electric harpoon while giant tuna fishing.  These fish, and giant tuna alike, gorge themselves on sardines and krill and when satiated rise to the surface and layout while they digest their massive meals.  It is possible to approach these monsters while they are lying out and harpoon them on the surface, and then quickly kill them by electric shock to keep the quality of meet at its peak.

By using an electric shock and harpoon the fish dies quickly and eliminates the lactic acid buildup in the meat that would normally occur during the titanic struggle they put up if caught on just hook and line – a quick kill ensures the best quality tuna which is flown to Japan and sold in the world’s largest tuna markets- some fish bringing as much as $10,000!

What else could it be?

It is not unusual to find giant tuna and sword fish together in one area- during these feeding opportunities whales, tuna, sharks and swords along with other predatory fish will be on station to get their share of the bounty!

The boats used in tuna fishing using the method of electric harpoon are unique as well.  The vessel has a bow pulpit 30 feet long and just wide enough for a man to make his way out to the end- here with the help of the mate high up in the crow’s nest, which extends some thirty feet above the water, he spots the fish laying out on the surface.

A rope is tied to the harpoon and then to a big float so that if the fish is not killed directly and runs it can take out the line and buoy until it tires and is picked up later.

Unfortunately this Captain suffered an unforeseen consequence linked to the sad day 911- he had several large tuna on board, one valued at over $10,000, not knowing that 911 had happened he made his way back to port to prepare the fish to be flown to the tuna markets in Japan, unfortunately there were no planes flying and the catch had to be sold on the local market at pennies on the dollar.